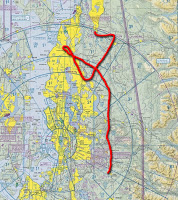 I flubbed up another exercise in pilotage with this flight.

The plan was simple: fly from Black Diamond airport (95WA) to Harvey (S43), below the Seattle Class B. It's practically a straight line north, but I still messed it up. All I had to do was stick to a course of 337 until I got to the Snoqualmie River, then turn slightly to around 321 and proceed to Harvey. The whole trip was only a measly 36 nautical miles, over land that is only a few feet above sea level. The weather was very clear and I could see for dozens of miles, it seemed. I was never at more than 2500 feet, so I had a good view of the ground.

Nevertheless, I lost my way. Take a look at the track of my flight here. Not exactly ruler-straight, is it? I did well enough up along Lake Sammamish, in part because I had that big lake as a reference point. But then, as I continued north, I got confused. At first I thought I was too far south, then too far north, then too far west, and so on. I saw rivers and highways and other features that I thought I recognized, but I still got confused.

I tried working with VORs. The 152 has only a single VOR receiver. I used SEA initially then switched to PAE. I knew that Harvey was on the 080 radial from the chart, but I couldn't seem to get to the radial. It felt like it was taking too long to get there, so I turned around, and then turned around again.

All in all, this was a pretty sorry performance. And this was under good conditions. I'm not sure how I finally managed to locate the airport. Thank goodness the weather was good and I departed with full tanks, and I was in an area with lots of airports and flat terrain.