A very pleasant flight in good weather over SoCal this afternoon, from the tiny Santa Paula airport with its uncomfortably short runway to Big Bear City. It was really warm outside—too warm for my tastes—although Big Bear was a great deal cooler. I made this flight alone, but I might take some passengers back into Los Angeles; we'll see.

I left altitude up to the autopilot for practically the whole trip, and left the AP in heading mode most of the way. I turned the AP off as I neared the lake and then did the rest by hand. Landed very smoothly.

On this pleasant and routine flight, I left Phoenix in darkness, and taxied to the gate in Los Angeles exactly at sunrise. I ran behind the real-world flight a little bit, since I got a late start.

The weather was very nice, air very smooth, and for once there was hardly any headwind—just ten knots, instead of the 110 knots that I seem to see a lot in the flight levels. According to the weather reports, high speeds aloft swirled around me, but on my route it was pretty calm.

I'm still having a problem with flickering runways. Given that essentially everything has been replaced, it's a bit mysterious.

This was a simple flight from Phoenix to Los Angeles, a route I could fly in my sleep. The real SWA1574 was substantially delayed, but I took off pretty much on time. The headwinds were terrible: 114 knots at my filed altitude of FL320. It took a long time to get to LAX. Everything went smoothly, though, and I landed by hand after making most of the approach (to 24R) by ILS.

I note that the RW flight now shows a duration of 2 hours. Airlines must be slowing their aircraft down even further to save fuel. Or perhaps there's just a lot of traffic.

Yesterday my network problems seemed to ease up after I spent three days' salary on a router, modem, and cables, at the suggestion of France Télécom (I finally got someone who sounded at least vaguely familiar with computers on the telephone).

Then, this morning, my Web server failed solid. So I have no Web site or e-mail at the moment. So I'm still in no position to post anything worthwhile to my blogs (which are inaccessible now, anyway, unless someone types the URL directly).

I still have Internet problems, with my Internet connection being virtually stopped about 90% of the time, ever since the start of December. France Télécom still hasn't provided me with a fix; I'm trying their latest suggestion but the results are discouraging so far. I still suspect that it's their network.

At the same time, the desktop computer I use failed last Sunday, leaving me completely without a PC. I managed to cobble something together out of parts, but for the moment I'm practically offline, so logging flights isn't really an option at this time.

Weather was just barely VMC for this flight in a new Bonanza from Sanderson to Harvey. It only took about half an hour. After accidentally starting out in the wrong direction (west instead of east), I turned around and followed V27 (SEA230) up to Puget Sound, where I turned north, and then skirted around the Class B to the east to get to Harvey. Much of this was flown really low to avoid the low clouds: I was at 2000 at some points over Puget Sound.

The runway at Harvey (the paved one) was extremely tiny, only 2700 feet. I flew a really short short final and, amazingly, made a very smooth landing. There's a turf runway, too, but I like pavement. 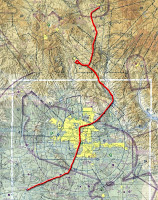 After my jaunts to Paine and SeaTac, I decided to take one more flight at dusk out to Sanderson. I departed from 16R and turned west looking for the 230 radial from SEA. Unfortunately another pilot talked to me at this point on the radio and I lost my situational awareness; I had to weave back and forth a bit afterwards to try to find my radial. I finally got it, though.

The weather was quite cloudy and misty and deteriorating. I tuned to the Mason County NDB as well as riding the radial so that I wouldn't miss the airport, and a short distance from the airport I turned directly towards the NDB, as crossing the NDB pretty much aligned me with the runway at Sanderson.

Landing was unremarkable and smooth. The sun had just slipped below the horizon as I parked on the ramp. Flying after dark in the Cessna makes me nervous if it's over areas with mountains but no well-lit towns.