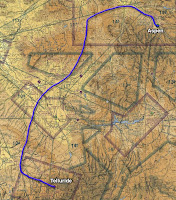 On this flight over the majestic Rocky Mountains, I decided to sneak around the west of the mountains to limit my maximum altitude. Usually I fly more or less straight between Aspen and Telluride, but by flying to the west I was able to stay at 11,000 feet MSL or below. I still used oxygen and recommended it to my two virtual passengers, but I used less of it.

Other than that, nothing special about this trip. I usually go from Telluride to Aspen, and not the other way, but I already had a Baron sitting at Aspen, and it had been there for two months, so it was time to move it.

I did plan a route but only followed it approximately, since weather was excellent and I tried to take shortcuts as terrain permitted. The approach to Telluride was steep, but the landing was good.