This flight went pretty well most of the way. I've been flying Eaglesoft's Citation X 2.0 for a while now, and most of the time the FMS performs well, but sometimes it does weird things.

In this case I was lucky until I was nearly over Denver, going north to make a U-turn and come back into runway 17R. The VNAV wouldn't descend, so I had to force that by hand. Then, somehow, while I was looking at something else, VNAV commanded a 6000-fpm climb, which put me nearly into a stall and activated the stick shaker and so on. It took a while to get control of the airplane, and my full load of passengers was not happy. I had to wrestle with the FMS (which I eventually gave up on) and the autopilot to come around to land, and somehow I ended up landing on the wrong runway, 16R instead of 17R. Fortunately there wasn't too much traffic at KDEN, and ATC had just signed off. Still, the latter part of this flight was a mess. 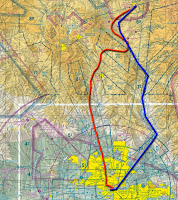 A relatively uneventful flight in darkness, VFR. The weather was just above minimums. I knew the terrain was mostly flat and relatively low between my departure and destination, but I nevertheless cut things too close, especially during the approach—I was only about 200 feet above terrain at some points, as I could see the trees even in the darkness. There was a hill just before the airport and I didn't spot it until the last moment because I was lower than I probably should have been. I knew I was high enough to clear terrain, but not by much. I'll have to be more careful.

I bought another Citation X and had it delivered to Seattle, whence I flew it to San Francisco, then to LAX, then to Sin City. The blazing speed of the Citation made this practical in one day. The aircraft performed very well, and it was great fun.

I flew the first leg before sunrise, arriving at SFO in darkness during the evening, arriving at about 9 PM. I flew the next leg, to LAX, before dawn, arriving just as the sky was really starting to brighten up. The flight to Las Vegas was in the afternoon. I ended up at Signature in Las Vegas.

This flight was so short I wonder why I bother to log it. It was in one of my 152s, which has been parked at tiny Sky Ranch in Carefree for a while. Even in the klunky 152, this flight only required about 20 minutes. Entirely visual and pilotage, of course. I know Phoenix well, so no need to bother with VORs and what-not (the 152 is not generously equipped, anyway).

I requested my clearance into the Class B as soon as I left the ground, since there isn't a lot of room for delay. Received it and proceeded towards Camelback Mountain, with instructions to make a right downwind for 26. It ended up that I was closer to the base leg than the downwind, which the tower noticed. They proposed a base for 26 and I took it, and I also got approval to land long, since my favorite parking spots in the shade on the north side of the field are at the west end of the runway.

The only real excitement was a jet on my tail that made it important to clear the runway quickly once I touched down. My chosen point of touchdown was ideal (I know the airport well), and I was able to scoot off to the taxiway in a flash, and it was only 200 feet or so to my parking place.

I've been flying several of my Citations all over the place. N7929A has received quite a workout, in particular. Over the past few days, I've flown it from Los Angeles to San Francisco and back several times, plus a flight to Phoenix from LAX.

One of my flights from SFO to LAX had to be aborted and restarted endless times, because of a bug in the latest hotfix of Eaglesoft's Citation X. After checking it out on Eaglesoft's so-called support forum (thank goodness there was a thread on it), I learned of a workaround. Essentially, the pressurization system fails to activate if the current barometric pressure is above 29.92 inHg. As a result, the cabin pressure drops with the outside pressure and eventually you get a CABIN ALTITUDE warning, followed by an EMERGENCY DESCENT warning. Obviously, that's no way to fly. Fortunately, the workaround is easy: just set the altimeter to 29.92 until the cabin starts to pressurize (a few seconds), and then set it back to the local altimeter setting.

I don't know if Eaglesoft will fix this; we'll see. Usually add-on developers lose interest in their products after releasing them and making a couple fixes. They move on to other products, because it's more fun to write new code than it is to debug and fix existing code, and because there's no financial incentive to fix a product once people have already paid for it. Unfortunately just about all the add-on developers (and indeed, just about all small software companies) are this way. For similar reasons, support is often spotty, and Eaglesoft is no exception in that respect.

Nevertheless, the aircraft itself is a joy to fly, apart from that pesky pressurization problem, but that's easy enough to work around. Everything else seems to work pretty much as advertised. The FMS works very well, as do the other systems on board. It's a pity that things like ground power don't seem to be simulated, but you can't have everything, and the competition (Wilco) is certainly no better. I prefer Eaglesoft right now, despite their poor attitude (other add-on companies have poor attitudes, too).

Anyway … lots of flights in the Citation. It's such a fast aircraft that it's fun to fly. You can actually get somewhere in a reasonable amount of time in a Citation. I usually configure the FMS for maximum performance, so speeds of 525 knots over the ground are not unusual, and with favorable tailwinds, I can do a lot better. For some reason, there are often jet streams blasting their way down from SFO to LAX and then east, so if I fly in those directions, flights are short and sweet.

At any given time, I usually have one or two Citations resting at several of my favorite airports, including LAX, SFO, SAN, PHX, LAS, and so on.