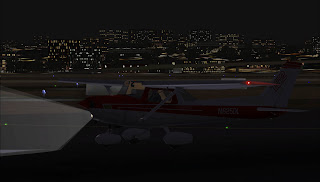 I flew this offline because I was violating regulations. I half-expected it to end in tragedy, but I got lucky.